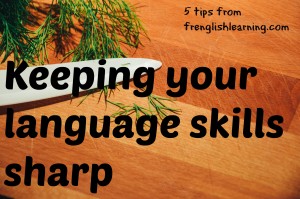 I recently had a reader ask me this question: How do you keep improving and challenging yourself in French and expanding vocabulary?

So, here we go – my top 5 tips for keeping your own language skills sharp. Note that I’m assuming that you already know a language here and are just trying to keep it up. If you’re trying to learn one, that’s a whole other issue – one that cannot be summarized in 5 tips. 🙂

I know I’ve said it a million times that TV is not a great choice for learning a language. However, I really think that TV is a great easy way to get the words flowing back in your head, so to speak. When I was working up to start speaking French to my children, I felt like my own French was a little rusty. So, I started recording shows in French on my PVR and watching them while on the treadmill. At the time, I was recording mostly from Radio-Canada: http://ici.radio-canada.ca/tele/ which still has a few good options.

Netflix also has some shows and movies with French audio but they are hard to find. Dear Netflix, if you would please give me an option to search by audio language, maybe I’d re-activate my account.

DVD’s are another easy choice. Once I started looking at our collection, I realized that a lot of what we have includes French audio options. I didn’t know what was sitting on my shelf! It usually says in tiny print at the bottom of the DVD box what languages are included, or you can also check the disk’s main menu to find them.

If your collection comes up short, Amazon.ca and Amazon.com have a plethora of bilingual DVD’s. Older TV series are fabulous for this – lots of running time for reasonably cheap. For example, I picked up the complete series of Everybody Loves Raymond (Amazon.ca) (Amazon.com) on sale and spent my treadmill time watching an episode or two of that for a while. I just noticed that they also have Friends with French options – that ought to keep you busy for a while. Of course, now that we have a dog (see pic at right – isn’t he cute?), I’m doing the vast majority of my exercise outside, so I haven’t been watching as much French TV. I find that I don’t need it as much anymore now that my French brain is back up and running.

This was another method I used predominantly when I was trying to refresh my language skills before using them with my kids. I found some books at our local library and read a few. Some of them were fabulous – others, not so much. If I were to do this again, I would find something that I was interested in reading in English and then see if a French translation existed. This is a bit of a cop-out because the cultural element is missing from translated books. However, it’s better than nothing.

I suppose French audio books would be even better because you’re hearing the native pronunciation of the words.

I’m putting together a source list for electronic French books, so if you know where to get some, please let me know in the comments.

Tip #3 – Read the instructions in French

If you live in Canada, this is fairly easy. Every food item on the grocery shelf has instructions in both French and English. So do toiletries and many other items. I try to read the French side as much as possible – except for medications. I don’t want to overdose on anything simply because I was trying to keep my French up to date.

For websites that I frequent regularly, like the public library and online banking for example, I have my language when I login set to French. This is such a simple thing but I’ve actually picked up some vocabulary this way. The language on my Google account is set for French, which means I get French navigation instructions.  I set it up that way in order to get French results when I’m searching for French stuff.  Before I changed my language to French, believe it or not, French results were getting eliminated from my French searches.  Now, I have the problem of the French version of websites showing up even when I purposely load the English version.  Confused yet?  Me, too.  Dear Google, how about a bilingual setting?

This is the most obvious one but I saved it for last because it’s not feasible for everyone. If you have native speakers around you, being able to practice with them is like a gold mine. I haven’t had much luck with this, even living in an area that has a large French population. I speak French and get responded to in English, even though I’m told that my accent is pretty good. I know they are trying to be helpful, but it’s not really helpful at all. 🙁

A second choice for practice is to speak with others who are also trying to improve. This is less intimidating than speaking with a native French person and you’ll all be helping each other out. I need to get on this more myself with the other moms at our French club. We’re all fluent, so we should be setting an example for our kiddos by speaking French to each other not just during club but when we chat before and after as well.

Bonus tip – Remember that it gets easier

I find that the more I speak French, the easier it is. If my kids and I read a lot together, it’s easier to speak later. If the words are on my computer screen, when a child comes in and asks me a question in English, I respond in French without thinking about it.

Do you have any tips to add? I’m always looking for more ideas!

3 thoughts on “5 tips for keeping your language skills sharp”