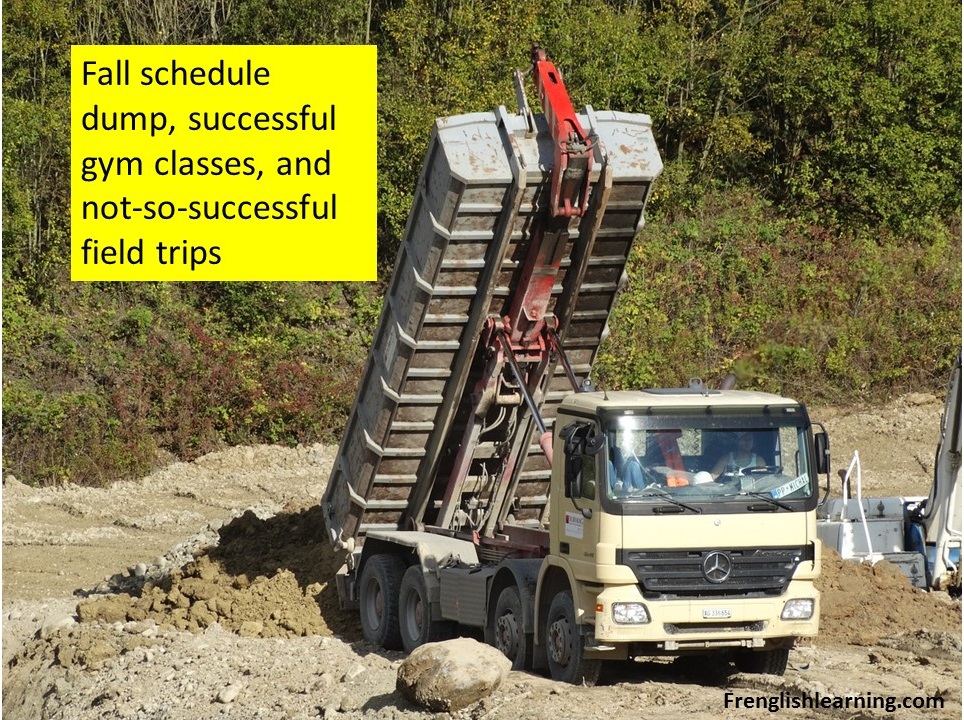 I’m noticing that the fall scrambles are hitting our household.  You know that feeling of having taking on too many activities and having no time left over for anything else?  In prior years, I have pushed through the feeling.  This year, I’m finally realizing that the appropriate response is to cut back as needed.  The more tired and overwhelmed I get, the less French I speak with my kids.  It’s like the second-language part of my brain just won’t function once I get past a certain stress and/or fatigue level.

So, last week I put on hold a few of the regular things we had been doing in our homeschooling routine.  All of the things that I suspended are good things.  We just can’t do everything.  I’ve made a note on my to-do list to re-evaluate in the spring when our unit studies are a little lighter and we’ll probably have some time to add some things back in.

I didn’t cut back on French at all.  Many things can be picked up in large chunks as needed later, but French isn’t one of them!  We’re still trying to increase our French time as much as we can.  Two of the ways we’ve been trying to do that are gym classes and field trips.

I finally got our local recreation centre to offer a gym class in French.  The kids are loving it!  Each week, they get to practice a different sport.  So, they are expanding their vocabulary, getting the chance to try a bunch of new activities, and exercising at the same time.  Win-win all around!

Field trips – thumbs down (so far)!

My other addition for the fall was to do more field trips with native French speakers.  We had attended many workshops, etc when my kids were younger.  At the time, they just weren’t ready so we stopped for a while.   We restarted this month.  So far, we’ve done two and it’s been a learning experience.

The first trip was a nature workshop/hike in Gatineau Park.  Our route was a short trail where we walked a little ways and then stopped and listened to our guide who gave us a lot of supplementary information.  We then walked a little further and stopped for more info.  Some of it was interactive, but not a lot.  The workshop went well for the first little while, but after an hour, the kids were tired and so was I and we still had an hour to go!  Lesson learned:  An hour and a half maximum unless it’s broken up by free play or other activity.  Lesson #2:  If it’s going to be a workshop, don’t assume it’s interactive.  Check.

The second trip we went on was a presentation at the National Arts Centre of Charlotte et le marchand musique.  The music at this presentation was wonderful.  It also gave the children a chance to go to the NAC and experience the theatre at a reasonable price.  However, from a language-learning perspective, it was a complete waste of time.  I was expecting a musical of sorts – a play with musical support from the orchestra.  The musical support was there, but it was just one man narrating the story.  There were no sets and only one prop (a coat).  Even just the addition of a second actor would have made a huge difference.  I found it really hard to understand what the man was saying – I needed to be 100% focused – almost squinting my eyes – in order to understand what he was saying, if that makes any sense at all.  After I tuned out for 20 seconds, I was lost.  Needless to say, my kids didn’t absorb a whole lot.  My daughter complained that he wasn’t even holding the instruments he was talking about – he was just pretending to hold them.

The next day, I was chatting with a friend about it, and we were able to narrow down precisely what the problem was:  No visual cues.  The actor wasn’t speaking too fast, and he didn’t have a strange accent. There was just nothing supporting him in what he was saying.  There needed to be something happening visually to pull the kids in and to keep them understanding what was going on.  Lesson learned:  Make sure there is going to be enough visual activity before signing up next time.    Interactive learning is still going to have the most impact, but as a minimum, there needs to be some visual cues happening.  For activities that have only auditory focus, there isn’t much point for us.

Speaking of auditory, I mentioned last week that we have been listening to some music.  Does my kids’ need for visual cues mean that I’m giving up on the music front?  Not necessarily.  When we listen to music, my children have the benefit of hearing native speakers.  It’s also engaging a different part of their brains.  Sure, they are not going to learn as much as they do from some of our other activities, but it’s really easy to pop in a CD while in the car, so why not?

Am I giving up on field trips?  Absolutely not.  Field trips are a great way to hear native speakers speak French “live” and to meet francophone people in our area.  I’m just going to be more selective on what we do.  It takes a lot of time, effort, and often money to participate, so I just want to make sure that the benefit we are reaping is worth it.

Do you go on French field trips?  If so, what do you do?