One of our r

ecent themes at French club was whales (les baleines).  We started with a game where one child was the whale (the hunter).  We used a scarf as a blindfold.  The blindfolded child made a noise and the rest of the children echoed the noise back.  The blindfolded child had to find the other children (the prey).  The prey were not allowed to move once they chose their place.  For safety reasons, the game was played in an open area without obstacles, and a mom walked with the blindfolded child just in case.  This activity came from The Big Green Book of the Deep Blue Sea by Helaine Becker.  Fabulous book with lots of great ideas (it’s in English, though.)

After the opening game, we sang a song:

We discussed how whales don’t really eat fingers, but how it was fun to sing anyway.

This simple book Les baleines by Melvin et Gilda Berger contains a few facts about whales – it was an easy read-aloud for our group that has children of varying comprehension levels.

I printed off a few copies of this memory game (free):  https://www.ac-strasbourg.fr/fileadmin/pedagogie/casnav/ENA/1er_degre_outils/Jeux_ecole_maternelle/Fichiers/Petit_poisson_blanc.pdf  The vocabulary is listed right on the instruction page, which is fantastic.  We made sure the kids said what was on the sheet (i.e. what cards they turned over, whether or not they were the same, etc).  Because our topic was whales, matching the whale cards was worth 2 points per card and the other animals were worth one point per card.

We did a paper maché whale craft using a balloon.  Good grief I will never do paper maché with kids again.  They complained and whined through the whole thing.  I totally underestimated how much glue we’d need too.  The rest of the activities were great.  This one was not!  We left them to dry and painted them two weeks later.  Apparently we didn’t put enough layers on the balloon so when one was popped underneath the paper maché, the whole thing caved in and one child was left with a beat-up looking whale.  Let’s just say there were tears.  Sigh. 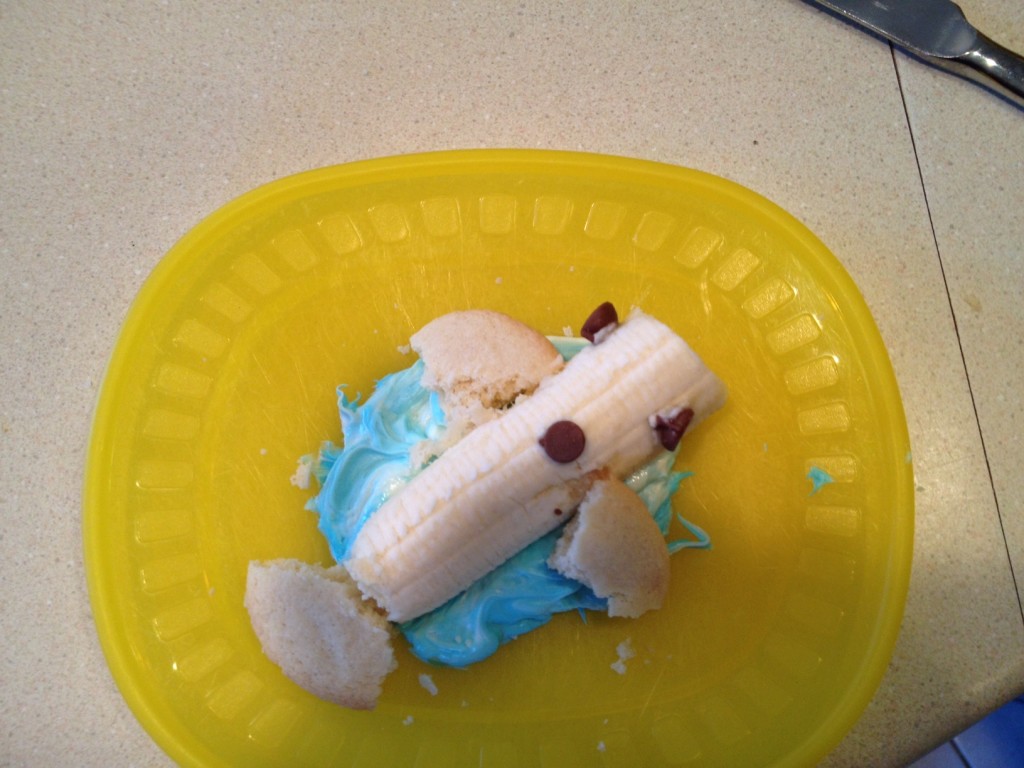 Ok, back to the good stuff.  Whale snacks – these were great!  The kids had a fun making them and of course, eating them too. 🙂  Here’s the source for these: http://graced1.blogspot.ca/2010/10/whale-wouldnt-you-know.html

In addition to the disastrous paper maché painting, this time we spent most of our time playing games.  We had several options set up and let the kids rotate through at their leisure.  We re-used the memory game noted above.

I also printed some sea animal bingo cards from here:  http://bogglesworldesl.com/seaanimalbingo.htm (note the card title is in English, but the rest is just pictures, so we just spoke in French while we played – I had the animal names ready in French ahead of time).

The third rotation game was Go Fish.  I used the vocabulary cards I printed from Mille Merveilles which you unfortunately need a subscription to access.  I just printed 4 of each type of animal and the kids followed the same basic rules of Go Fish, asking the questions (As-tu une…) and saying Va pêcher in French, of course.

Another hit is a guessing game we often play.  This version was for animals/other things related to the ocean.  I assigned an item to the child whose turn it was.  They came back into the room and gave the other children a hint as to what their item was (i.e. an animal that lives in the ocean water) or something to that effect.  The other kids asked yes/no questions (i.e. Is it big, is it a mammal, etc) in order to narrow down what the item was.  We’ve played this a number of times with different themes, and they still love it.

We also made another snack – this time a beach scene.  Apple slices, raisins, a gluten-free baked pretzel for the trunk, bananas, jello, and fish candies.   Too fun!  (Here’s the source of the idea.)