We had a little Valentine celebration at our French club this week. Here’s what we did: 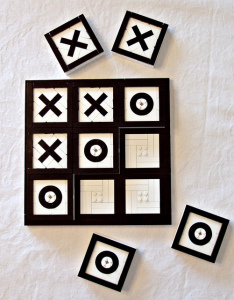 This game came from this link. We just played it in French instead. The children took turns being the leader and making X’s and O’s with their arms. It only held their attention for 5 minutes, but it was enough to get some of the wiggles out.

I bought a package of cheap white shirts (I think they were supposed to be undershirts, but whatever) and I cut them up the middle to make lab coats based on the instructions at this link. I wrote the word “Scientifique” (Scientist) on my white board and had the kids copy that plus their names on the back of their lab coats using fabric markers. Then they could decorate the coats with whatever pictures they wanted.

Sink or float: Using the same link as the lab coats for inspiration, we did a sink or float science experiment with valentine candy. Again, we completed this activity in French and I wanted a French worksheet, so I made my own – in French, based on the one I found at this link. You can find that here. The kids loved putting the candy in the water and being able to eat it too.

Conversation hearts: We followed the instructions at this link and completed the experiments and discussion in French. The kids had a great time with this one too. We left the bottles on my kitchen counter and had another look at them this morning. The results surprised us all!

Decorating cookies is always a favourite. This time they were heart-shaped, and the icing was pink and red.

Each child brought valentines for everyone and they handed them out at the end. I managed to find bilingual (English/French) Star Wars valentines at Walmart for my son. However, there weren’t any French puppies to be seen, so my daughter was supposed to write a short note in French on the back of hers. Notice I said she was supposed to (she didn’t). I found out afterwards that they have French valentines at the Superstore. Note to self for next year!

In previous years, I’ve used printables from Enchanted Learning. Note you need to pay $20/year to access that site. I was a member there when my kids were younger – mostly for English stuff, but they do have a bit of French as well.

This year, I printed some off from Mille Merveilles. I’d been humming and hawing about joining this site for a while. What actually convinced me was how long it took to make that crazy sink or float worksheet (see above). The $30/year price tag was worth it to me once I realized how much time I could spend making all this stuff on my own. I’ll be writing a full review of that site in a few weeks once I’ve had a chance to go through it in more detail, but so far so good.