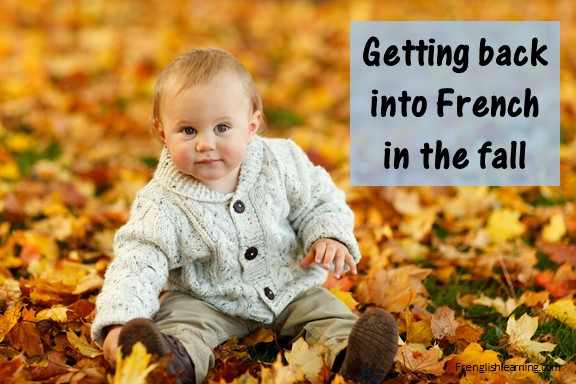 I’m guessing we aren’t the only family who’s struggling to get back into the fall routine, so I thought I’d share a few things from our week as we make the transition.   I’m so grateful that only two of the kids’ extra-curricular activities started this past week.  That gave us a bit of breathing space.  The rest start up over the next few days, so I’m bracing myself for the full onslaught of fall.

When getting back into the routine after a break, I tend to start our academics on a staggered basis, adding in a few things each day until we get back to full capacity.  We do some learning activities in the summer, but not as much as the rest of the year.  This summer, we did even less than usual because of the constant hot, sunny weather.   I’m completely fine with that – the whole point is to take advantage of nice days when they come along whether that’s in February or August.  We are flexible with our scheduling.

I started the kids off slowly on Monday with a few workbooks that they had been doing during the summer.  Tuesday, we resumed our unit study of New France after a week off and looked at the impact of the Treaty of Paris and the Québec Act.  We also resumed our French topical lessons, which are about ants at the moment.

My daughter (age 11) re-started her French story writing, which I had let slide for most of the summer.  I have a writing prompt book for her, but she wanted to write her own ideas, which I readily agreed to.  She’s writing a series of short stories about a dog named Goldie, which are actually kind of fun for me to read.

My favourite French moments of the week

I was in our family room and my son was talking to me from the hallway and he said that he needed to finish his work so he could play Minecraft.  In French, he said:  « Je dois terminer mon travail pour que je puisse jouer à Minecraft. »  I nearly fell off the couch.  Be still my beating heart, did he just use the subjonctif correctly ?!  I haven’t even taught him that verb tense yet.  It was really encouraging for me to hear him use that phrase because it reinforces that all the incidental exposure that he’s getting from me talking to him, reading, music, TV, apps, etc. is actually working.  He’s picking up the language nuances beyond just what he’s being directly taught from his grammar books.  That, at least for me, is a big deal!

My second favourite moment was actually a book we read.  À quoi ça sert… Une fourmi, un chien et un piment?  This book had us all giggling as we went through.  It’s a picture book that appeals to a wide age-range.  If you can read French yourself, I highly recommend checking your library to see if they have it.  If they don’t, Amazon.ca has it here, and Amazon.com here and Renaud-Bray here. 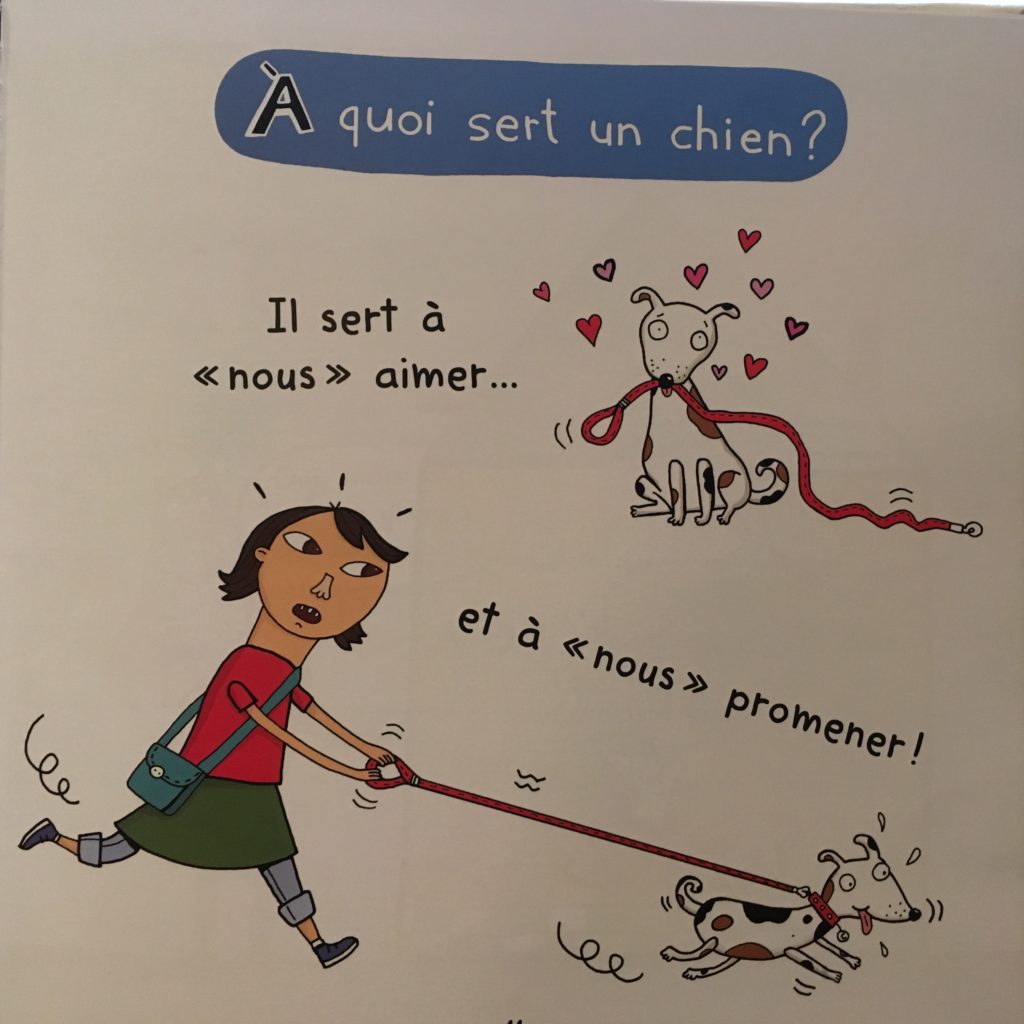 About a year ago, I had started requiring a “quota” of French sentences per day, which we had been gradually increasing over time (read how I introduced that here).  We had reached about 55 sentences a day and had been stagnant there for a while.  Counting that many sentences each day is really a big pain.  What ended up happening was that the kids would leave it until the end of the day when I was finished teaching and was trying to move on to other tasks.  After interacting with them all day, I’d be looking for peace and quiet while I marked their math and instead they would come into my office and talk to me about absolutely nothing just to get their sentences in before the cut-off time.  They’d say stuff like Regarde le chien, maman.  Il est tellement mignon.  There are only so many days in a row that I can handle that, so I knew we had to change our system.

So, this week, we tried an experiment of French only before noon each day.  I had hesitated in trying something like this before because I was worried that they just wouldn’t talk at all, but now they have more extensive vocabularies so I’m cautiously optimistic.  It’s actually more French talking time overall, but it gets interrupted with other activities and lessons in English that we often do before lunchtime.  We’ll see if this method sticks or if we are forced to abandon it. I found the recipe section of the Metro grocery store website by accident a few weeks ago and I feel like I hit the jackpot for French recipes (which we do on a weekly basis as a vocabulary building activity).  A whole bunch of kid-friendly, reasonably simple ones all together in one spot.  We made the banana squares this week as a treat and they turned out pretty well.  For future weeks, I picked a bunch of the healthier ones and have mapped them out for the next few months so I won’t be trying to figure things out on the fly all the time.

This site is easy to plan with because it’s in English and French.  If there is an ingredient listed in French and I don’t know what it is, I hit the English button at the top and voilà instant translation of the whole page.  So much easier for making grocery lists… although I think that when we’re making the recipe if there is a word that I forget, we’ll look it up.  I think that the act of looking it up adds to the ability to recall the word later on.

Between our French recipes, and the Kids Cook Real Food lessons that we’re working through, my kids are getting kitchen practice at least twice a week.  They have both made baking recipes completely on their own and I’m planning on getting them to make a simple dinner (tacos) on their own in a few weeks as well.  I’ll let you know how it goes.

We had cancelled our Netflix account more than a year ago and last month they sent me an offer for another free trial, so we decided to take them up on it.  So now when I have insomnia, I can watch old episodes of Downton Abbey from my bed.  I’m not sure that’s a good thing, but I digress.

For French programming, Netflix’s search interface is as frustrating as ever.  Why can’t they just let me search for programs by language?  Maybe because it would be more obvious how little there actually is in French?  Just a guess.

This week, I was going to watch Shrek in French with the kids on there, but we have it on DVD so we used that instead.  In a future week, we might watch some of the sequels or maybe Les Pingouins de Madagascar.  If you have Netflix in Canada and use it for French movies, I’d love to know what you’re watching because so far I’m not impressed with what’s available.  There seems to be more options for TV shows, but I need to explore that further.

Are you back into the fall routine yet?  How’s it going?

3 thoughts on “Getting back into French in the fall”