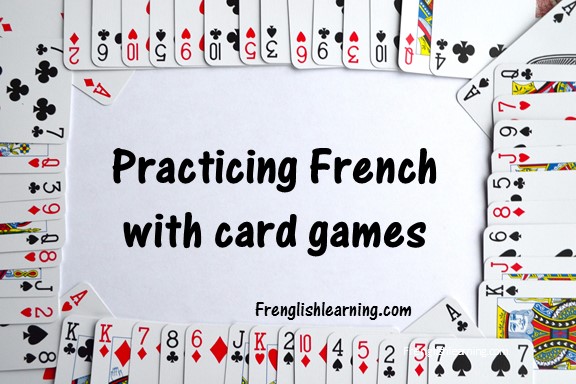 Making language practice fun is a great way to help kids remember what they’ve learned.  We play games a lot as a family and cards have been a very popular choice lately, so I decided to incorporate French practice into a few of the games that my kids love so much.  That way, they get to play them more often as we count them as “school.”

Ok, so in reality my 11 and 9 year olds are both well past playing Go Fish.  However, it was a great choice when they were first starting out.  It’s a great one for practicing numbers and repetitive language:

To add French practice to crazy eights, each player says the number of the card they lay down in French as they play it.

One you’ve got the numbers down, you can add the suits as well:

This game was a recent discovery for us.  It’s quite interesting and a good option for 3 players. If you’ve got 4 players, euchre is a great game that you’ve probably already heard of, but you need exactly 4 people, which isn’t always possible.  So, for 3 players, try knaves.

To practice French while playing this game, we just speak French the whole time we’re playing. If you’re not quite ready for that yet, and you’ve got your numbers and suits down, you can add a few phrases at a time, such as:

This site has a free printable pdf game that uses French cards.  Each card has a picture of a female scientist, along with a short description of her contribution to the field.  There is a specific game explained on the site that you can play with the cards – you basically try to build laboratories with members of specific fields.

Instead of printing the cards, I decided to buy them.  We play cards a lot and on the site it said that the cards can be used for regular card games as well because they have the traditional number and suit markings on the top left side.  I had visions of playing cards and having side conversations in French about female scientists.  Sounds great, right?  Well, not so much.  The problem with the cards is that the number and suit markings are so small and the font is so “cluttered” that they are really hard to see. I was squinting and double-checking the numbers each time we used them.  I thought it was just me getting old but my kids had trouble too.  So, I would definitely recommend using the free printable version to try them out before buying.

Does your family enjoy playing cards?  Would you consider speaking French while you play?

One thought on “Practicing French with card games + free printable”