Raising bilingual kids is hard. I’ve said it before and I’ll keep saying it – mostly to remind myself. If I expect it to be hard, then I’m less likely to get frustrated and give up when it actually is. By far, the biggest challenge we’ve faced so far in our family is… (drumroll, please)

Kids who think too much 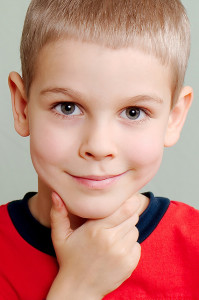 Really? Kids thinking is a bad thing? Couldn’t we all benefit from being a little slower to open our mouths to speak? Absolutely. The problem is that when you’re learning a second language, you need to practice. That means speaking and doing your best, even if you’re making mistakes. Kids who think too much want to get it perfect in their minds before they verbalize anything. This can really slow down progress and even halt it in some cases.

So what do we do? This is a work in progress in our home. I’m trying to get the kids to speak in a context where they feel confident. I started with reading aloud. Reading is something they have always enjoyed and has come fairly easily to them, so they both read out loud to me almost every day. I acknowledge that this isn’t the same thing as speaking their own thoughts, but at least it’s a start.

The other thing we’re working on is memorizing short texts. I was listening to a talk by Andrew Pudewa a few weeks ago and he was explaining how memorization really helped him become more proficient in Japanese. Apparently the brain is able to apply the language and structure from memorized texts to other spoken language. This sounded great to me, so I had my kids start with some short texts. To save myself some work finding something suitable, I decided to utilize the lines from Star Wars that my son is writing for copywork right now. I’m sure that Star Wars is not exactly what Mr. Pudewa had in mind, but I wanted to start with something reasonably easy that my kids would actually want to memorize. They recite all the ones they know each day and learn one new one. Each day, their verbal practice gets longer. Once they are proficient with these short lines, we’ll move on to short skits and other items.

The last thing that I’m considering doing on a more regular basis is a tip I got from Olena Centeno from Bilingual Kids Rock.She said that when her children answer her in English instead of Ukrainian, she will say “huh?” until they repeat the phrase in Ukrainian. Eventually, her kids figured out that it was easier to just say it in Ukrainian the first time instead of having to repeat it over and over again. She only does this when she is absolutely sure that her children know how to say the phrase in Ukrainian. I’ve done this a few times with one word answers but never with complete sentences. I don’t want to turn French into a negative experience for my kids. It’s so hard to find the balance between pushing them just enough so that they realize they can do it, but not so much that they freak out the possibility that they can’t!

This post has been linked to the Raising Multilingual Children blogging carnival..