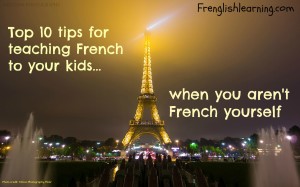 Yes, from a language learning perspective, it would be better if you were Francophone. But you aren’t and you can’t change that. Move on.

French grammar is a nightmare – even for those of us whose minds are wired for memorizing things. I used to think that I found French grammar difficult because my first language is English. I learned differently in University. I was taking a course called Le Français, langue des affaires (translated as: French, the language of business). The course was geared to Francophone students and to my knowledge, I was the only Anglophone there. On a few occasions, I was the one correcting the grammatical errors of my colleagues in our joint projects. Yes, they corrected mine too, but I was shocked to realize that French people make mistakes with French grammar. French grammar is a nightmare because it’s hard, not just because it’s not your first language.

I really had to get over this one myself. I was so worried about making grammatical errors and teaching my kids my mistakes, that for a long time I hardly spoke French around them. I came to the realization that it was better for them to learn and make a few grammatical errors than not to learn at all. Now, I just let myself speak. If I come to a word that I stumble over, I just look it up with them using my Larousse iPhone app. If I’m not sure whether it’s “le” or “la”, I make my best guess, look it up later, and try to remember for next time.

3)  Start now. Regardless of how old your kids are, now is the time to start.

If I had to do it over again, I would speak to my kids in French exclusively from the time they were born. My husband would speak English to them, and they would pick it up from other kids. I have yet to meet a Francophone in our area who has had trouble learning English, but I meet tonnes of Anglophones who are having trouble learning French.

From all the books I’ve read on the subject, picking up a second language is definitely easier the younger the child is. However, it’s never too late. With the right motivation and environment, your kids can learn. So start now!

4)  If your kids already speak English (or another language), start slow.

We’ve all had it drilled into our heads that immersion is the best way to learn a language. That’s probably true. However, kids do not understand instantaneously just because they are kids. They still need time to absorb. And, maybe it’s just my kids, but if you are talking about something they don’t care about, they will just ignore you if they don’t understand. So, instead of discussing your observations outside (where the ideas are abstract and the kids can ignore you), try teaching them how to ask for their breakfast in French. That is something they need to know, so they can’t ignore you.  🙂

I have found that once you get going, it’s like a snowball. Slow to build at first, but once you have the basics, it’s easier to expand more quickly as time goes on. You just need to get that momentum going!

5)  Use different forms of interaction to keep them interested.

If you are the only source of language instruction and you’re always talking in the same way, it will get exhausting for you and boring for the kids really quickly. Add different things to mix it up for all of you. Speak French during craft time. Play games in French. Read books together.

Once they have the basics down, you can add other media like electronic games and television shows. Note that these are not nearly as effective as personal interaction in French, but they are better than nothing. A few months ago, I started having my kids watch a French TV show several days each week. We subtracted English TV and added French TV. They were ok with this because they choose the show they watch. As long as I think it’s appropriate for them, we’re good to go.

6)  Make sure to include lots of books.

Another thing I wish I had done sooner! Books are so fabulous for learning and enjoyment at the same time. I am so grateful that our local library has a huge collection of French picture books, chapter books, and reference books. We read picture books together (I read one long one, my daughter reads a medium one, and my son reads 2 short ones each day), and the kids read chapter books on their own. I have a bin of French books in our family room and they each spend 15 minutes reading whatever they want from the bin each day. I periodically rotate them – and my kids also choose books to go in that bin.

If you don’t have a big French book collection at your local library, but you live in Canada, you can probably get some French books through inter-library loans. If you are outside Canada, I am working on a list of sources for electronic books that you can borrow. Watch for that in a future post. 🙂

7)  Try to mix with people who speak French natively if you can.

I think my kids thought that French was a language I was making up to make their lives more challenging – until we attended a French co-op for several months a few years ago. At that point, they realized that there were other kids in the world who spoke French. It was a good eye-opening experience for them. We also went on some field trips and attended a few workshops with Francophone homeschoolers in our area.

If you dread speaking French to your kids or sitting down with them to help them learn it, they will know.  If you like it, there is no guarantee they will too, but if you hate it, you’re definitely in trouble. Keep a positive attitude about the work and commitment yourself, and it will flow down to your kids.

It’s hard. It’s tiring. I get it. Just do what you can and always come back to it. We were recently away with family for a week. We didn’t speak any French to each other because I didn’t want anyone to feel excluded from the conversation. It was really tough to get back into the routine when we got home. But we persevered and we’re back up and running – until the next interruption!

I could only think if 9. What would you add? Please let me know in the comments!