We recently re-started our French club after a break for the summer. This session, we have 8 children ranging in age from 7-11. This is a great group size – big enough to do interactive group activities but not so big that it gets overwhelming to teach. Kudos to school teachers – not sure how you manage so many kids all at once!

We kicked things off with an obstacle course. Our course had 4 steps that I introduced one at a time. For each step, I explained the step, demonstrated it, and then had the kids do it while I repeated the step description again. After the kids had done it, I asked them to tell me what they did. Our club uses an immersion approach so this was all done in French.

The first step of the course was to walk around our camping trailer (parked in our country driveway). After the kids had all marché autour de la caravane and told me that they had, they sauté à l’arbre mort (we have a dead tree we really need to cut down). I then had them combine the two steps together, tell me about it again, and then added lancez la balle à un ami (ou une amie) et rattrapez as the next command. They did the third step on its own and then combined it with the first two, telling me each time what they had completed. Courez autour de la maison was the last step. By the time they were finished, they had repeated the vocabulary many times, heard their friends repeat it, and repeated the actions several times. A week later, most of the kids remembered the words they had learned. As a bonus, at the end, I had them run around the house twice to get the wiggles out before we settled in inside. It worked. They were all very attentive while we completed the next section! 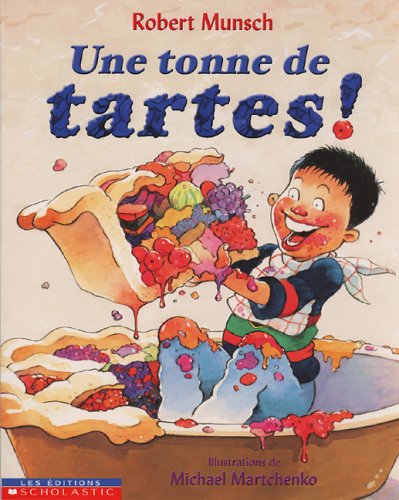 I read Une tonne de tartes by Robert Munsch while the kids listened. I asked a few key questions as we went to make sure they understood what was going on:

I asked the kids to name the 4 food groups and I wrote them on a white board that I had divided into 4 sections. We went through the things that Samuel ate in the book and then wrote them in the appropriate section. I also had the kids take turns drawing a small picture of each item on the board:

I then asked each child to name something they ate for breakfast (or lunch, by the end to avoid repetition) and we classified & drew those things on the board as well.

At the end, we classified the pies that Samuel had eaten.

I had pre-selected 4 pie types and printed them on a sheet of paper. I photocopied the paper and had the children ask each other what their favourite type of pie was from the 4 on the sheet. They then wrote each other’s names down beside their favourites. Aside from a small meltdown by my daughter because apple pie was not among the choices, the kids absolutely loved completing the survey.

One of the moms brought pre-made individual-sized pie shells and we baked them before we started. After we finished our survey, we moved to the kitchen and I asked each child what type of pie they wanted. After responding in French, the moms filled their pie shells to order with vanilla yogurt, strawberries, blueberries, bananas or some combination thereof. Not-so coincidentally, the fruits we offered were the same as those on the survey. All super-simple options that didn’t require any additional baking.

All of these activities took about an hour and a half combined to complete. The kids had a great time and picked up some new vocabulary along the way. Mission accomplished! 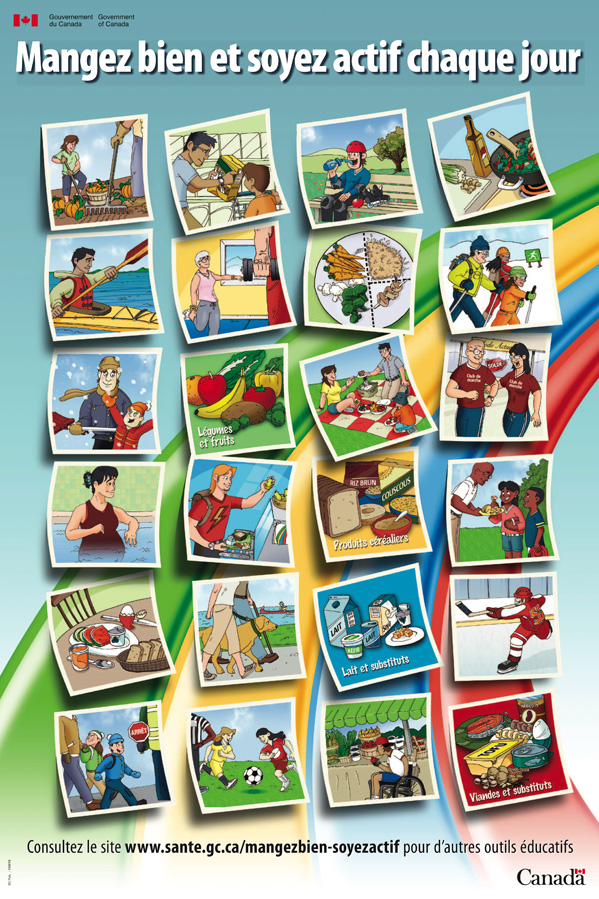 I complemented this activity with food guide discussion that I did with my kids on their own at a separate time. We re-read the Robert Munsch story together and then used the free lesson plans provided by Health Canada at this link: http://www.hc-sc.gc.ca/fn-an/food-guide-aliment/educ-comm/toolkit-trousse/index-fra.php (French versions, obviously). We had previously studied the 4 food groups in English, but it was a few years ago so this was a good chance to review and hopefully pick up some more food vocabulary. I didn’t want to do this section in French club because many families have different ideas about food and don’t necessarily agree with the guide.

Since we were doing a quick review (rather than an in-depth study), I went straight to the journal de Florence section here (p. 7): http://www.hc-sc.gc.ca/fn-an/alt_formats/pdf/food-guide-aliment/educ-comm/toolkit-trousse/plan-2a-fra.pdf and had the kids classify the different things Florence ate and how many minutes of physical activity she did. On page 13 of the same pdf file is a blank journal that my children filled out for a day. I won’t lie and tell you that they loved it, but they did it.

We still have a few other family activities scheduled for this coming week that tie in with the Robert Munsch book. Those come from volume 3 of the teacher’s guide that I reviewed here.

One thought on “French club: Obstacle courses, books, and pies (oh, my!)”