I thought this was going to be the best French club ever. Turns out it was a bit of a gong show, so if you do these activities, please make sure to tweak them as I’ve suggested. 🙂 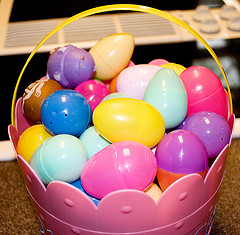 Preparation: I made a secret code message using symbols.  You can grab that here.   I cut up the letters of the code and put each one in a plastic Easter egg. I also put each symbol word of the message in an egg. Right before the kids were ready to start, a friend and I hid the eggs around my yard.

What made this a bit of a gong show: My stupidity for one. This is really embarrassing, but I thought I’d hide one of the eggs in the tailpipe of my friend’s car. It was supposed to sit there and fall out when the kids were looking close to it. Of course instead, it went further into the pipe and I couldn’t get it back out. While the kids were looking for the rest of the eggs, I was Googling what happens to a plastic egg when it’s trapped inside an exhaust pipe. The answers ranged from “it will just come out when you start the car” (yay!) to “you could blow up the muffler” (uh, not so great).

I confessed to my (thankfully) easygoing friend who thought she should just start her car and see what happened, but the more we moms discussed it, the more worried I got. I called my mechanic:

After I explained what happened, he basically told me to go ahead and start the car and rev it a bit and the egg should come out. If it didn’t and it ended up melting in there, the car might look a bit like the Batmobile as the fire came out the back, but it wasn’t going to hurt anyone. Phew. Turns out the egg came out as soon as my friend started her car. Talk about feeling relieved.

Gong show part 2: The kids didn’t find all the eggs. The moms ended up looking around the yard for a while but we couldn’t find them all either. I think my husband is going to be running over eggs in the spring with the lawn mower. 4 eggs were missing in total. I was hoping against hope that they contained the code for unused letters.

Gong show part 3: Of course the missing eggs contained key words from the message. The kids were trying to put the message together. They had “Il y a des dans le banc piano.” And they didn’t know what to do. One of the other moms was trying to get them to actually look in the piano bench, but it was like pulling teeth. They were happy when they finally did it, though.

Suggested tweaks:   1) Don’t hide an egg in the tailpipe of a car. 2) Hide the eggs in super-easy places. Who cares if it only takes 5 minutes to find them all? It’s winter and everyone is cold anyway.

I read two books. The first one was Elmer joue à cache-cache by David McKee. This was a simple, cute story with repetitive language. The second one was Où est caché le petit chat by Jacky Goupil. This one was a where’s Waldo type idea where the kids had to find the cat on every page of the book, along with various other objects listed. This was incredibly popular. They practically knocked me over while they were trying to be the first to point out where the cat was hiding.

No gong show elements here so no suggested tweaks needed!

Preparation: I found this super-cool idea here. I had prepared 3 bags with various items from around the house. I drew a question mark on the front and wrote down various adjectives to describe what was inside. I also assembled supplies so the kids could make their own mystery bags.

Activity: I held up each bag and read the adjectives that described what was inside. If the kids couldn’t guess what was inside by the description, I passed the bag around and let them feel from the outside to see if they could figure it out.

Then each child prepared their own mystery bag and presented it to the rest of the children for them to guess what was inside. They all absolutely loved this activity!

Ok, so maybe it was just the first part of this lesson that felt like a disaster and even that was recovered nicely. It really was a fun French club. I was completely exhausted when it was over, but it was worth it!