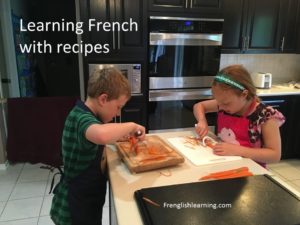 This past winter, I felt like we were in a real rut as far as language learning was going.  I like to switch things up and use a variety of methods and learning situations, so I decided to add cooking & baking in French to our regular routine.

For the past few months, my children and I have been making one French recipe together each week.  By French, I mean that the text of the recipe is in French – not that the recipe is necessarily French cuisine.  We speak in French while we make it.  Depending on how complicated it is, this has resulted in us spending between 15 minutes and an hour interacting in French and we’ve gotten to try some new recipes that we hadn’t made before.

We started with more sweet recipes just so I could entice the kids into the process and we’ve veered into slightly healthier options as we’ve gone along.  Rather timely, the Kids Cook Real Food ecourse is open for enrollment this week.  You can check that out here or read more at the bottom of the post.

Sources for recipes in French

I managed to track down a few options at my local library, but not many – and our library has a really extensive collection of books in French.  In any case, I did have one success there.  Mon premier livre de cuisine pour enfants.  Although the book’s cover claim of each recipe being 4 steps is a bit of a stretch, the recipes are still really simple and quick.  We made two things from this book.  The first was a type of sandwich wrap, and the second was a chocolate mousse.  I would make both of them again.

If you can track down this book at your library, I definitely recommend checking it out.  Otherwise, Amazon has it here.

The rest of the cookbooks that I checked out were way too complicated – written more for aspiring chefs than regular people who don’t have time to spend 5 hours in the kitchen.

Like most families, we have our regular go-to recipes, so a few times rather than experimenting, I just used French versions of what I was already used to making.  Fortunately, I had two cookie recipes already pre-translated from a previous need, so I had two weeks covered.

For a third week, I took the time to translate another recipe.  I ran things through Google Translate to get a good base, then had to go back and fix some of the expressions.  Linguee was a big help on that front.  I like this translator because it will let you look up whole phrases rather than just specific words.  I’ve used both the desktop and free ios app, and both are great.

However, it still took more time than I was really willing to invest every single week.  Occasionally, maybe, but not every time.

Obviously these are a dime a dozen in English.  Finding good French sites can be trickier, especially if you have specific dietary needs.  I have had mixed results from the web before, which is why I didn’t go straight to this option before translating my own stuff.

Since for the month of May, I was doing my own paleo-ish dietary experiment, this past Sunday, we tried Gâteau paléo au chocolat dans une tasse.  I’ve seen variations of this recipe floating around Pinterest (in English).  All I can say was that the link we found was awful.  The only saving grace was the scoop of ice cream we had on the top, thereby defeating the whole paleo option.  My 9 year old son said that the recipe would have been a lot better if it weren’t paleo.  Ha!  It’s too bad because there are lots of good paleo desserts – I just wouldn’t include this one on the list.

Do I need to go back to translating?  Hopefully not!  If you’ve got a source for French recipes that you’ve tested yourself, I’d love for you to drop the link in the comments.  🙂

A few warnings about making recipes in French 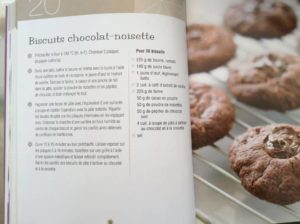 The very first recipe that we made this spring was an epic fail in my mind, but apparently the results weren’t so bad because all the cookies got eaten.  The recipe (pictured on the left) was from a book that was given to me by a friend a few years ago.  If you zoom in and read the ingredients in the list, and then look at the instructions, you’ll notice that they don’t match.  Step 3 says to add raspberry jam, but there is no raspberry jam actually listed.  Of course, this had me totally confused.  One of my francophone friends enlightened me that these types of bad translations happen often.  So, watch out for that if you’re using a French cookbook that’s been translated!

The second problem with this recipe for me is that I’m used to baking using volume measurements.  For example, we add one cup of flour to a recipe.  If I see recipes that are written using grams,    I automatically convert them to volume as if a gram were the same thing as a ml.  For example, if I see 50g of cocoa powder, I assume it’s 3 tbsp plus one tsp.  As it turns out, that is completely wrong.  I was actually supposed to use a baking scale and measure the weight of each ingredient.  Apparently, “real” cooks use weight anyway because it’s more precise.  Who knew?  Now I do. 🙂  Anyway, the cookies had too much of some ingredients and not enough of others, but my kids ate them just the same.

We’re going to keep going with this!

Despite the difficulties, I plan on keeping up with one recipe per week.  Once we have a few good ones, we can rotate through them and not necessarily make a new one every week.  My daughter absolutely loves to cook and bake, so this is a good tie in for her.  My son isn’t as keen, but he likes the results of the activity (at least most of the time!).

On a related note, I’ve been eyeing the Kids Cook Real Food eCourse for a few months, and it’s now open for enrollment.  They are offering three videos about teaching kids how to use knives in the kitchen (one for kids, two for parents).  You can find those here (in English.)

I previewed these over the weekend, and they are really fantastic.  Both my children liked the kid one a lot.  A few days after watching the video, my son was reminding me of the various knife holds I could use to slice a pear.  He remembered everything that he had seen.  Hurray!  My daughter is begging me to buy the ecourse.  I’m going to do so – I’m just debating what level of access I want.  UPDATE (June 1, 2016):  I bought the all access level and I’m so glad that I did!  I was so excited that I was up most of the night watching the videos and reading through the lessons – they are really that good.  The kids started with the first foundation video today on measuring.  They learned a lot and are looking forward to the actual cooking part, which we will start in a few days. 🙂

Now this course isn’t going to help with our French language acquisition, but it will certainly help with kitchen skills.  Check it out here.

4 thoughts on “Learning French with recipes”