My son is obsessed with Star Wars. Every time I turn around, he’s got his light sabre going, trying to get his sister to duel with him. When I send him up to his room to get dressed, I don’t see him for ½ an hour because he gets distracted by the Star Wars books he’s got on his bed. Getting him to do his chores and his academic work has been a real hassle lately because he’s always in the middle of a Lego Star Wars battle. So, what do I do? Try to incorporate Star Wars into our French lessons!

I was thrilled to discover that the trilogy of Episodes 4, 5, and 6 that we already own has a French dubbed version included. I used the DVD’s to write a short transcript of 2 scenes from the movies: Vader’s Revelation from Empire Strikes Back and Leia meets Wickett (the Ewok) in Return of the Jedi. I put the dialog in script format in French and printed out a copy for each of the kids who were here for French club this morning. Each scene has 2 characters in it, so the kids took turns playing each role.

There was one family whose children had not yet seen the movies, so I made sure to ask permission from that mom first before I prepared the activity.   I also let the other moms know the plan before they arrived in case they had any objections (even though I knew their kids were just as obsessed with the characters as mine are). Movies are a funny thing – what bothers some children doesn’t bother others, and I didn’t want anyone to be afraid.

In retrospect, I should have chosen a shorter and less intense scene than Vader’s revelation (I am your father). Mark Hammil’s expression on the bridge is just so funny to me that it’s hard to imagine it being scary. However, a few of the younger ones did tense up a bit, so it would have been better to use something else. Vader also has a huge amount of lines that get rather complex, so the kids stumbled a bit.

That being said, my kids both said at dinner tonight that they wanted to do the skits again, so I think I’ll have them practice with each other. Memorizing a script is a great way to help solidify language! If you’d like to use the scripts we used today, you can download them here: 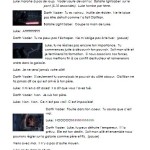 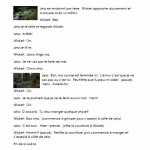 My son is also a very reluctant writer. He balks at anything longer than a word or two at a time. He’s only 7 so I’m not concerned at this point, but at the same time, I’d like to build his confidence.

Star Wars to the rescue once again! To get some language phrases at the same time as practicing writing, I made a custom copywork booklet for him. I played the DVD’s and took screen shots as I went through, putting the dialog beside each one (in French). Yesterday, he read the first one aloud to me and then wrote it… did he just smile while holding a pencil? Mission accomplished!

If you’d like to use the book with your child, I’m giving it away to my e-mail subscribers absolutely free. Just sign up to follow this blog by e-mail and/or receive my newsletter and you’ll receive a pdf file with 70 quotes (35 pages) of copywork that will motivate your Star Wars enthusiast to start writing away!